A man had his eyes stitched shut and his face covered in pig skin after suffering a rare reaction to an antidepressant which caused him to ‘burn from the inside’.

Jonathan Laird, from Greenfield, Indiana, was prescribed lamotrigine tablets in April 2016 to boost his mood after being diagnosed with bi-polar disorder.

Within a month of taking the pills, the 38-year-old was suffering flu-like symptoms and his eyes became so sore it felt as through ‘glass was piercing them’.

The symptoms rapidly escalated and he developed red raw sores inside his mouth and lips, as well as at the back of his throat and across his entire body.

Mr Laird went to A&E and was immediately transferred to an intensive care unit where he was diagnosed with Stevens-Johnson syndrome (SJS).

The skin on Mr Laird’s face started rotting and flaking off, leaving his flesh exposed and prone to infection.

Doctors wrapped his face in pig skin grafts, which keep affected wounds sterile before a proper skin graft can be done. They have long been used as a wound dressing in burns patients. 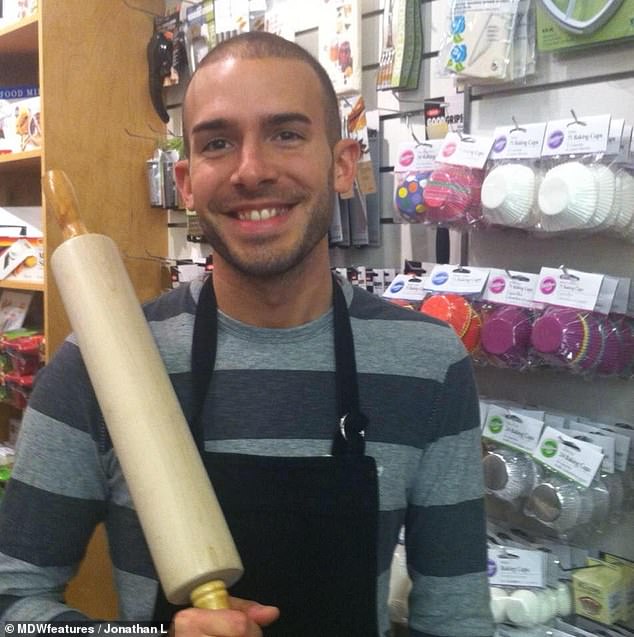 Jonathan Laird, from Greenfield, Indiana, was prescribed lamotrigine tablets in April 2016 to boost his mood after being diagnosed with bi-polar disorder 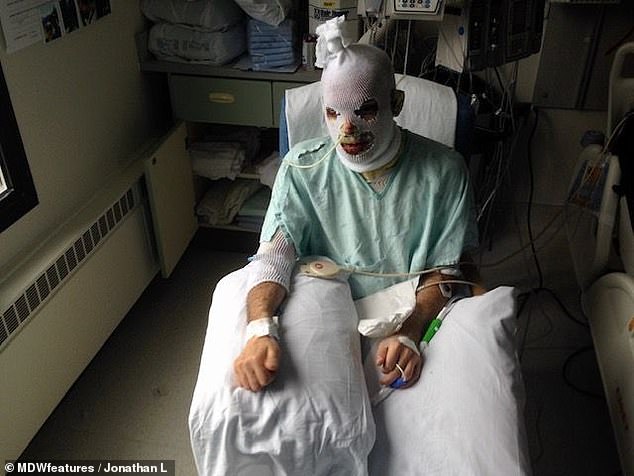 The skin on his face started rotting and flaking off due to Stevens-Johnson syndrome, leaving his flesh exposed and prone to infection (pictured wrapped in bandages to protect him from infection) 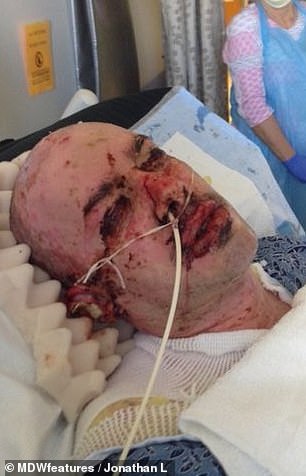 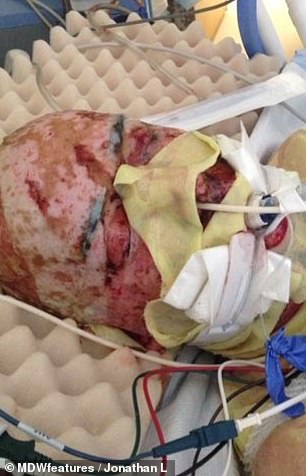 Stevens-Johnson syndrome (SJS), is a disorder that affects the skin, mucous membrane, genitals and eyes. It causes the immune system to attack healthy skin and bodyparts. Doctors wrapped part of his face in pigskin (right) as a wound dressing to prevent infection

SJS often begins with flu-like symptoms, followed by a red or purple rash on the skin that spreads and forms blisters.

It does the same to the mucous membrane, reproductive organs and eyeballs.

Mucous membranes are a soft, thin layers of tissue which line the digestive system, the inside of the mouth and nose and the genitals.

When Mr Laird was admitted to hospital, doctors scrambled to save as much of his healthy skin as they could.

They even stitched his eyes shut for two weeks in a bid to protect his eyeballs because the disorder had made them ultra-sensitive to light.

Recalling his ordeal, Mr Laird said: ‘When you have Stevens-Johnson Syndrome you basically burn from the inside out.

‘It starts as a rash and then the rash erupts into blisters.

‘They stitched my eyes shut to protect my vision [and] they bound my hands together so I couldn’t rip the tube out that was down my throat.

WHY WOULD DOCTORS PUT PIG SKIN ON HIS WOUNDS?

Putting pig skin on an open wound, a procedure known as a pigskin graft, is a treatment usually used to help people who have suffered severe burns.

Burns and open wounds become very susceptible to bacterial infections, which can quickly become deadly, and are also extremely painful if nerve endings are exposed to the air.

Human skin grafts – ideally from the patient themselves – are the gold standard treatment for injuries like this but they are not always available at first.

Pig skin may be grafted on – a procedure called a xenograft – to temporarily protect the wound from bacteria and viruses from the outside environment, and also to reduce pain by covering the wound with something which feels like normal flesh.

Pig skin is used because it is so similar to that of humans. It is also often used in scientific studies or trials of skin procedures.

The skin is processed in a lab beforehand to make sure it is sterile. Doctors may also use synthetic skin coverings or skin grafts from dead people. 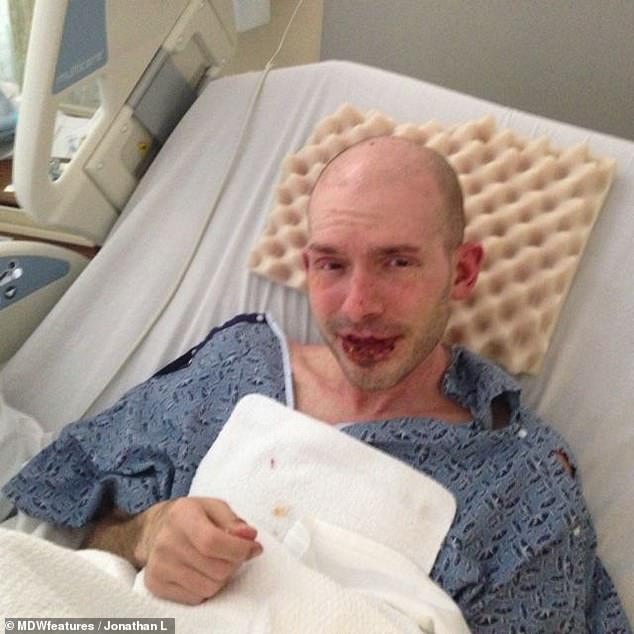 Within a month of taking antidepressants, the 38-year-old (recovering in hospital) was suffering flu-like symptoms and his eyes became so sore it felt as through ‘glass was piercing them’ 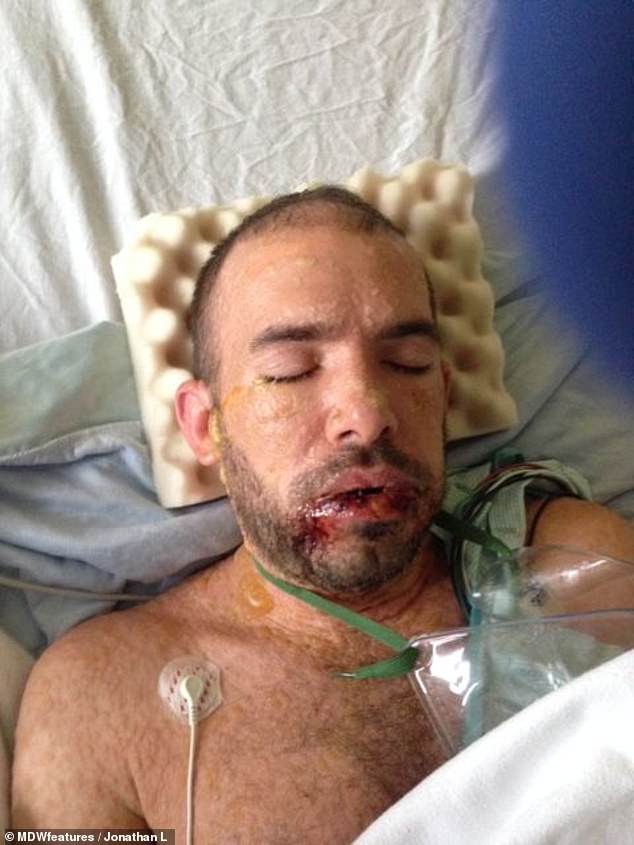 The symptoms rapidly escalated and he developed red raw sores inside his mouth and lips, at the back of his throat and across his entire body

WHAT IS STEVENS-JOHNSON SYNDROME?

Stevens-Johnson Syndrome (SJS) is a rare, serious disorder of the skin and mucous membranes.

It often begins with flu-like symptoms, followed by a painful red-purple rash that spreads and blisters.

SJS affects up to six people per million in the US. Its UK prevalence is unknown.

Other symptoms may include:

The top layer of skin then dies and sheds.

SJS’ cause is often unclear but may be as a side effect of medication or an infection, like pneumonia.

People are more at risk if they have a weakened immune system, or a personal or family history of the disorder.

Treatment can include stopping unnecessary medications, replacing fluids, caring for wounds and taking medication to ease the pain.

‘I don’t remember much. I fell in and out of consciousness. I felt like I was dreaming all the time, I don’t think I really knew that my eyes were stitched shut.

‘I had to communicate with my parents with pen and paper because I couldn’t talk, so they would say something, and I would write (my answers).

‘I said something like, “Am I going to die?” because I didn’t know and that was really hard for them to read. I just looked horrible, I looked like a plane crash.’

Mr Laird said he initially dismissed his symptoms as his body adjusting to his medication.

He added: ‘But when I woke up [one] morning I felt some bumps inside my mouth with my tongue and I thought “well what is that? That’s weird”.

‘They were like blackish red and when I opened my mouth and used my phone’s flashlight to see better, I could see in the back of my throat I had like two or three different bumps that were the same colour, like sores.

‘My eyes started to feel like they had little pieces of glass in them, it was very uncomfortable, and I was scared to touch them or rub them because it literally felt like I was going to cut my eyes.’

Mr Laird, who was already struggling with depression and bi-polar disorder, said he felt helpless in hospital.

He added: ‘Even simple things like going to the bathroom I couldn’t do without calling for a nurse. I felt very vulnerable.

‘One of the nurses I remember was amazing she took me into the shower so I could have my first shower in three weeks and I had to get naked in front of her, and I started crying, I just felt completely vulnerable.

‘I was at this person’s mercy who had to guide me and bathe me and it was just a really weird feeling.’

On June 1, Jonathan was released from the hospital and has continued to recover ever since. His skin will eventually grow back. 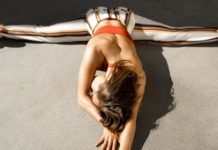